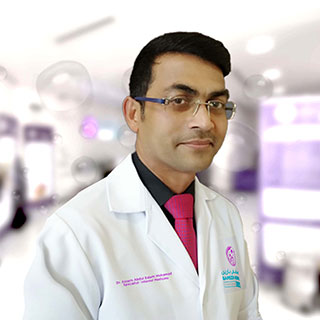 Dr. Azeem Abdul Salam Mohamad received his MBBS from TD Medical College, Kerala, India in 1994. He took his Master’s Degree in Internal Medicine from Kasturba Medical College, Manipal, India in 2002. In 2013, he received his Membership of the Royal College of Physicians, United Kingdom. Dr. Azeem started his medical practice at a multi-specialty hospital in his home country. He continued to practice at various hospitals in India, from 1995 to 2003 handling general medical conditions including cardiac emergencies. He acquired proficiency in doing various procedures such as pleural tap, ascitic tap, bone marrow biopsy, liver biopsy among others. He underwent training in general ultrasound from Regional Cancer Center (RCC), Trivandrum in 2003. In the same year, he moved to the UAE and worked as a Specialist Physician at prominent hospitals in Abu Dhabi.

His areas of expertise include diagnosis, treatment, and management of diabetes, hypertension, cholesterol, thyroid disorders, respiratory conditions like asthma and bronchitis, back pain, joint diseases, migraine, and neurological diseases. He is actively involved in Continuing Medical Education programs and he keeps abreast with the latest treatment methods and implements in his field.