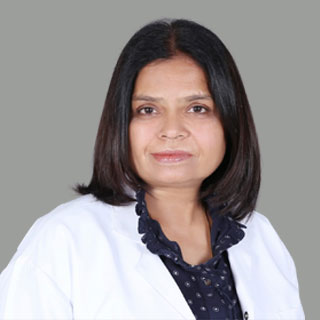 Dr. Kamlesh Mishra received her MBBS from Jawaharlal Nehru Medical College, India in 1988. She finished her MD in Obstetrics and Gynecology from the same institute in 1992. She completed her senior residency from Lady Harding Medical College, New Delhi from 1992 to 1995. Dr. Kamlesh also trained in gynecological oncology and advanced gynecology surgery in Sydney, Australia, in 2010. She received her Fellowship in Gynecology and Oncology from the Gujarat Cancer and Research Institute, India in 2009.

Dr. Kamlesh worked as Consultant Obstetrician and Gynecologist and Laparoscopic Surgeon at King Hammad University Hospital, Bahrain from 2013 to 2015 and in well-known hospitals in her home country. After that, she worked as a Specialist in Obstetrics and Gynecology and Laparoscopic Surgery in a large government hospital in Abu Dhabi and various other reputed hospitals in the UAE since 2017.

Her key areas of expertise include gynecological laparoscopic, hysteroscopic, colposcopic procedures, open gynecological procedures and all kinds of abdominal surgeries including gynecology precancerous and cancerous lesions.