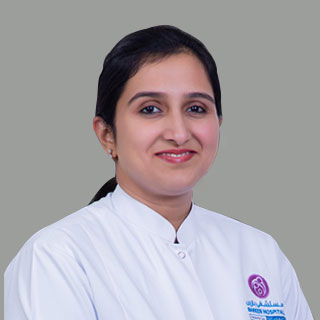 Dr. Nihal Harris has over 9 years of professional experience in the field of Obstetrics and Gynecology.

She completed her MBBS at Yenepoya Medical College, Mangalore then at Rajiv Gandhi University of Health Sciences, Bangalore in 2010. In 2013, she received her MS in Obstetrics and Gynecology at Yenepoya University, Manglore. A year later, she trained and qualified for Hysteroscopy procedures. In 2015, she became affiliated with the Centre for Advanced Gynecological Endoscopy Sunrise Hospital, India. In 2017, she became a Fellow in Minimal Access Surgery from the Association of Minimal Access Surgeons of India. After a year, she specialized in Ultrasound – Obstetrics and Gynecology at Chikitsa Ultrasound Training and Research Centre, India.

Dr. Nihal started her clinical practice in 2010 in large medical facilities in her home country. Simultaneously, she worked as an Assistant Professor and was involved in training residents, medical students, and nursing students in Obstetrics and Gynecology. In 2018, she moved to the UAE and worked as a Specialist Obstetrician and Gynecologist in a large private hospital in Abu Dhabi.