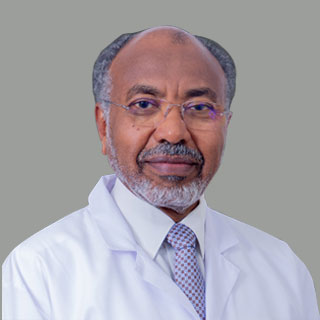 Dr. Tariq Aamir received his MBBS at the Faculty of Medicine, Khartoum University in 1981. He holds a post-graduate qualification in the United Kingdom and is a member of the Royal College of Physicians since 1992.

He started his clinical practice in 1981 as a House Officer, then as Senior House Officer, then as Medical Officer for almost a decade in Sudan and in Saudi Arabia. In 1991, he moved to the United Kingdom and became a Senior House Officer at Merseyside Regional Health Authority under the Registrar Training Scheme. In 1998, he became a Consultant Physician in General Medicine with special interest in Gastroenterology at the University Hospitals Aintree, Liverpool, United Kingdom. After a year, Dr. Tariq became the Consultant Physician and Gastroenterologist and Head of Department of Internal Medicine at Khartoum Teaching Hospital, Sudan. In 2013, he moved to the UAE and became a Consultant Gastroenterologist of 3 large private hospitals in Abu Dhabi.