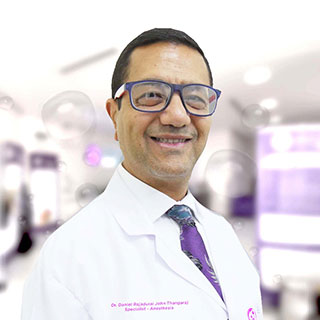 Dr. Walid Salah Badawy has 29 years of experience in Orthopedics and Trauma Surgery. He completed his MBBCH from Cairo University, Egypt in 1992, his MSC in Trauma & Orthopedics in 1997, and his MD (Doctorate) in Orthopedics and Spinal Surgery in 2002 from the same university. In 2003, he received his Fellowship in Spinal Surgery at the Royal Devon and Exeter Hospital, UK. He was awarded a PGA from Warwick University, UK in Intramedullary Nailing in 2008. He also completed his International Diploma in Musculoskeletal Ultrasound from the Catholic University of Murcia, Spain in 2015.

Dr. Walid started his medical practice at Cairo University Hospitals, Egypt in 1994. He moved to the UK in 2001 and continued his medical practice at Withybush Hospital and Morriston Teaching Hospital Dr. Walid worked as a Specialty Surgeon in Trauma, Orthopedics, and Spinal Surgery at Hinchingbrooke Hospital, Cambridgeshire, UK. In 2012, he moved to the UAE and continued his practice as an Orthopedics & Spinal Surgeon in a private clinic and day surgery center in Abu Dhabi. Dr. Walid’s main interest is in spinal surgery particularly treating lower back pain and degenerative disc disease both through microscopic surgeries (using the surgical microscope in all operations versus discectomies and spinal fusions) and non-invasive techniques including radiofrequency ablations and different types of injections. His practice includes total joint replacement (knee and hip joints) and knee arthroscopies.

To his credit, Dr. Walid has released several research and paper publications in national and international peered-reviewed journals, focusing on spinal surgery and particularly in the treatment of lower back pain and degenerative disc diseases:

Dr. Walid became a Clinical Lecturer in 2003 and is currently an Associate Professor in Trauma, Orthopedics, and Spinal Surgery at Cairo University Hospitals, Egypt.

He has also been invited to many international and national level meetings in Egypt, the United Kingdom, Turkey, UAE. Dr. Walid is a member of the Egyptian Orthopaedic Association, the Egyptian Spine Group, and is an affiliate of the Royal College of Surgeons in England.